While I expected to fall madly in love with Seville and all that this beautiful city has to offer, I vividly remember the days preceding my arrival to Spain and second guessing my decision to study abroad.The months prior to my departure were filled with excitement for the adventure to come, but as the days I had left in the

comfort of home became numbered, I became increasingly terrified of traveling alone for the first time in my life to live an ocean away from the only home I had ever known.

At the airport I felt my chest tighten and my eyes fill with tears as I said goodbye to my father knowing that I would not be able to hug him again for another three months. I was fearful of being away from my loved ones at home and of having to make new friends in Spain. Part of me felt guilty for being so distraught. I felt as though I was taking this amazing once-in-a-lifetime opportunity for granted. To ease my mind, I reached out to several friends of mine that had also studied abroad. I felt relieved to hear that they also experienced the same feelings I was experiencing, and that those feelings would be short lived. They shared so many kind words of encouragement and insisted that the next three months would be the best of my life. Nearly one month into my study abroad experience, I can say with complete certainty that they were right.

The act of studying abroad alone has taught me far more than I could have ever learned in a classroom. The most important of these lessons has been that all of the greatest things life has to offer us exist beyond our comfort zones. If I could tell the version of myself that was afraid to study abroad out of fear of being alone what I know now, I would tell her first to fall in love with her own company. As cliche as it sounds, having the confidence to be unapologetically yourself is essential in

achieving personal growth and living life to the fullest. I would also tell her that everyone else in her program were also scared to leave home at some point, and while that shared feeling would bring them all together, branching out and befriending locals would make her some of the most meaningful connections she will ever have. Making friends is never as difficult as we often think it is. Being confident enough in myself to create meaningful relationships not only with others but with myself as well has opened so many doors for me and I owe it all to my study abroad experience. 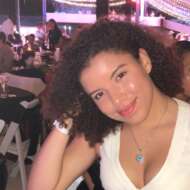