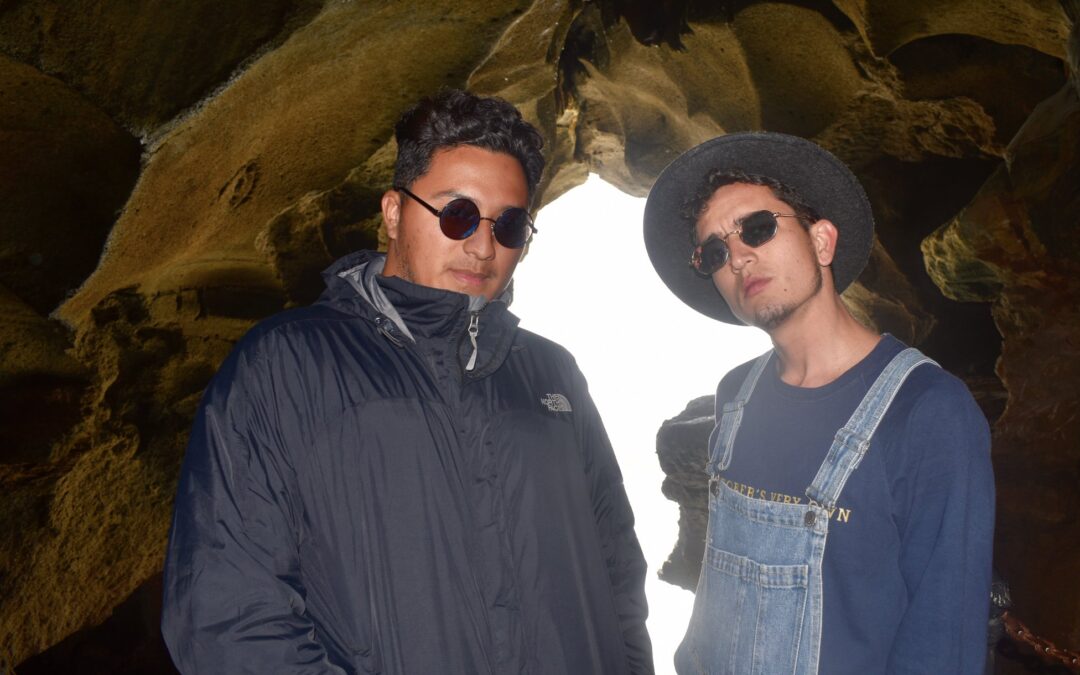 Separated by only 57 km of water, the levante winds coming over the Mediterranean connects the North of Africa to the South of Spain. Leaving early in the morning, students from ICS were bundled up and ready for the adventure of a lifetime. The weather may not have been ideal but somehow the warmth and energy of 30 friends kept everyone’s spirits up the entire weekend. Organized by the Student Travel Agency We Love Spain, our group took a fast ferry from the port of Algeciras, sailed passed legendary Gibraltar, and landed at the Spanish settlement of Ceuta in North Morocco in just under an hour. This
is where we were greeted by our Morrocan tour guide Larbi and the adventure really kicked off.

After crossing the border into the Moroccan side, our bus began the winding climb
through the Rif Mountain range to take us to Tangier. Many of us were surprised
to see just how lush and green this region actually was. Our first stop in
Tangier were the Caves of Hercules which is where, as legend holds, Hercules
slept during his 11th labour. The natural formation in the rock is a reverse
image of the horn of Africa. Moments later we were back on the bus and went a
few minutes down the road to our next activity, the legendary camel rides. If
you’ve ever seen an informational anything about ICS, you are almost guaranteed
to have seen this activity and it is obvious why. These crazy quadrupeds were
all smiles as they rocked back and forth to stand up and take students down a
stretch of beach. We all had a really fun time. After everyone got a ride, we
were whisked away to get to a  lookout point to see where the
Mediterranean Sea and the Atlantic Ocean meet. To cap off our afternoon we were
then taken to the Medina of Tangier for a little bit of sightseeing and whether
or not the sharif liked it, go through the old kasbah. The day was packed with
activities including a dinner at the hotel and it all seemed to fly by.

Waking up to the sunrise over the bay of M’diq at the Golden Beach Hotel, students 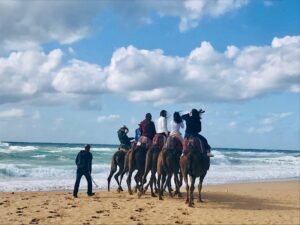 scarfed down a quick breakfast and were transported to the blue city of
Chefchaouen. More commonly referred to as Chaouen, the translation in Arabic is
“Look at the horns,” which refers to the 2 mountain peaks that the city is
nestled at the base of. The aesthetic of the blue city was too good to pass up
for anybody that wanted to spruce up their Instagram feed but the color
actually serves a real purpose. A chemical in the dye lets off a certain smell
that keeps mosquitos and most other bugs away. Larbi took us through the
labyrinth of the Medina until we stopped in an artisan shop that made blankets
and rugs. Nobody could resist the vibrant colors and intricate detail weaved
into every piece that the shop owner made. After a buffet lunch, we were given
free time to wander and try our hands at haggling with shop owners. Some were
better at it than others but everybody left with something they were happy
with. That night, students were treated to a “Fantasy dinner” in the old city
of Tetouan. Greeted by a thunderous procession, we feasted on typical Moroccan
dishes while being entertained by belly dancers, a band, just about everyone
getting henna and to top off the night, our very own Zaq and Skylar got
“married!” in a traditional yet mock ceremony.

For our last morning in Morocco, we went back into the old city from the night before and

were taken to a Berber pharmacy. There we were shown a variety of products, all
made with different herbs and oils, and each designed to treat something different.
The deals were too good to pass up and we all went home with lots of products.
Afterwards, in the market Medina, we had the opportunity to try our haggling
techniques with shop owners over leather goods, silver jewelry, and last minute
souvenirs. The trip was finished off in a small bakery tucked away in a back
alley that had all kinds of goodies. We all spent the last of our Dirham, got
on the bus and made our way back to the border. After getting our passports
stamped, saying goodbye to our new friend Larbi, we crossed into the Spanish
side, boarded the ferry and began the journey home. Filled with food, unique
gifts and a plethora of new memories, the weekend came to a close for all 34
ICS students and the advisers that accompanied us. It was a great weekend.

SAVE & ACCEPT
Secured By miniOrange