My friends and I went with We Love Spain to Praia de Marinha, a gorgeous beach on the southern coast of Portugal between Albufeira and Lagos. The three-hour drive proved well worth it when we arrived at the most beautiful beach I have ever seen!  It had numerous caves for swimming through and rocks for climbing on top of and jumping off of! We climbed through a narrow cave to reach a hidden beach that no one else was on, and I got to ride on a stand-up paddleboard with a local from Portugal. He pointed out to me two giant jellyfish in the water that I had to avoid, and although I was scared by the creatures I couldn’t take my eyes off of them and was fascinated by their colors and movements. 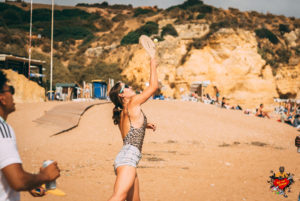 After we explored the hidden beach and numerous caves along that beach, we returned back to the main beach, and decided to go to yet another beach further east. We had to hold our backpacks and all of our belongings over our heads because it was high-tide, and we had to time our sprint through the water to get to the next beach without the waves coming in and soaking us! We spent another two hours or so swimming through dark caves, playing with red clay in the caves and leaving our names written in the soft material, as well as jumping off rocks into the crystal-clear water. We finished the day by eating some pineapple and peaches from a fruit stand at the top of the beach, and we walked along the giant cliffs overlooking the water just as the sun was setting!

The following weekend, many ICS students and I went on another trip to Portugal, but this time we stayed for three days and two nights in a hotel in Albufeira right on the beach! On the first day, I walked right down to the beach from our hotel, and I played in the waves for hours with my friends as well as walking the length of the beach and collecting beautiful shells. I also went on a pirate ship adventure, where my friends and I got to jump into the ocean far from the shore, and I somehow pulled out some old gymnastic skills and did a backflip off the boat. After the pirate ship, we all went on a 1,000-horsepower speedboat, and zoomed through caves and went airborne on waves all along the coast of Portugal. I couldn’t stop smiling the entire ride, but I can certainly say that I was sore the next day from the sheer power of the boat combined with the waves pushing us into the air!

The next morning we traveled to Cape Sagres, otherwise known as The End of the World. It is the Southwest corner of Portugal, and it has breathtaking cliffs that were 200-300 feet high that drop straight into the ocean. We could see

the sets rolling in and building as they came closer to shore and into more shallow waters, and then finally forming into huge waves that surfers far below were surfing. After we left the cliffs, we went to Doña Ana Beach, and my friends and I played Frisbee and collected shells for hours. On Sunday, we went to Sao Rafael beach, but there was a hurricane rolling into Portugal the following day and we were not allowed in the water for most of the morning. I played volleyball on the beach with my friends and enjoyed the breathtaking scenery and rocks of the beach. After Sao Rafael beach, we went to Dos Pescadores Beach, where we ate truly delicious food right on the beach and watched people surfing near the shore. There I met a girl visiting from Norway who was surfing for the first time in her life, in 4 to 6 foot waves and in cold water! All in all it was an incredible weekend, and I met students from other programs and countries, like Ireland, England and Japan.  We have kept in touch and have already gone out dancing back in Seville! This was certainly a weekend that I will never forget! 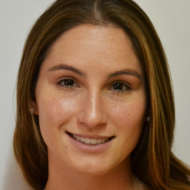